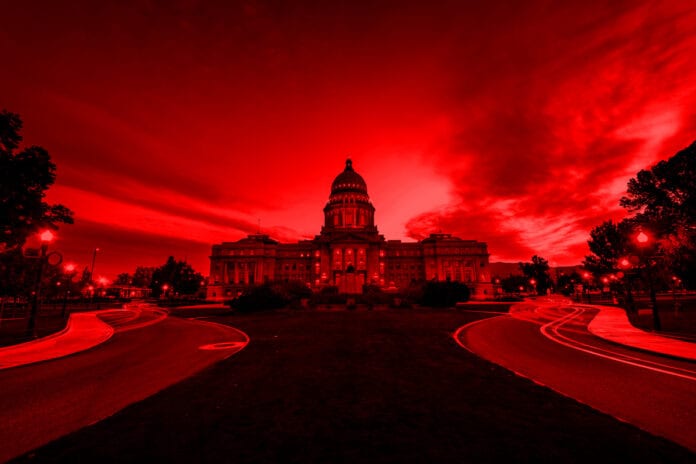 Idaho Conservatives has for years been ringing the alarm bell about the dangers posed by the far-right in Idaho. That danger will emerge in full force on June 23rd.

In violation of Idaho law and the Idaho Constitution, far-right Legislators plan to hold an illegal special session. Most Senators and Representatives won’t be there but many of those linked to the Freedom Foundation and the rest of the Far-Right Political Machine will.

The idea has been promoted by the comically named Freedom Man PAC. (Will they be handing out capes at their illegal session?)

The supposed justification for the illegal special session comes from a pair of Arizona lawyers. Their analysis, provided at the request of the Freedom Foundation, is more a commentary on the low standards of the State Bar of Arizona than the requirements of Idaho Code and the Idaho Constitution.

The out of state lawyers provide two main justifications for the legislature calling itself into special session.

First, they claim that Legislators have “plenary discretion” to interpret what constitutes a foreign attack on the state of Idaho. Translation: Anything, absolutely anything they want can be declared an attack on the state. Imagine the tremendous abuses such a precedent could be put to. It amounts to a claim that the legislature isn’t bound to the regular order prescribed by the Idaho Constitution at all, ever.

Second, they assert that there is evidence the coronavirus pandemic is caused by a manufactured Chinese bioweapon. (There are some indications that it’s possible the coronavirus accidentally escaped from a Chinese disease research laboratory in Wuhan that studies similar coronaviruses, though that’s not the leading scientific theory, which holds that the virus probably passed from a bat to an intermediate host to humans. No serious virologists believe the virus was engineered.) On the basis of that assertion, the two Arizona lawyers say it’s reasonable for the legislature to find that Idaho is under foreign attack.

Experienced Idaho lawyers, the kind who can read Idaho Code, have come to a far different conclusion.

“This call for a special session is not supported by facts or law and, if it proceeds, could inject confusion among the citizenry at best and promote anarchy at worst in the midst of the COVID-19 pandemic,” wrote the Idaho law firm Hart and Holland LLP in a legal opinion for House Speaker Scott Bedke and Senate Pro Tem Brent Hill.

While the Arizona lawyers focused on only one section of Idaho Code, Hart and Holland pointed out, the piece which says the governor can declare an extraordinary emergency in the event of a foreign attack, they apparently did not read the very next section, which says the same emergency can be declared if there is an “epidemic.” Maybe, just maybe, that is the relevant law.

Freedom Foundation President Wayne Hoffman has proposed what can fairly be called a coup. Under his bizarre legal analysis, using a statute that was designed to reconstitute the government in the event the Soviet Union nuked Idaho, the legislative session will simply begin on June 23, and whatever lawmakers are there will constitute a quorum capable of passing any bills they want to. Maybe Wayne Hoffman, who holds no elected position, will use this opportunity to have the lawmakers whose puppet strings he pulls pass legislation that would have no chance with sane people in the room.

Could this far-right group even try to impeach duly elected Republican Governor Brad Little with the handful of Senators and Representatives who show up at the Capitol? These same groups have been pushing an effort to recall him, an effort they themselves describe as a “mutiny.”

Of course, none of this will hold up in court, where the Freedom Foundation has a nearly spotless losing record. However, the heavily armed far-right plans to be there as well, which makes this sideshow actually dangerous.

The Real 3% militia plans to be there at the fake session. They are a heavily armed group that intimidates Legislators, and which is run by a man, Eric Parker, who spent time in federal custody after he pointed a gun at federal law enforcement officers. Ammon Bundy has been promoting the illegal session as well. On the staff of Freedom Man PAC, you’ll find Diego Rodriguez, a professional huckster turned freedom fighter who you might recognize as the man next to Ammon Bundy, yelling at law enforcement officers in Meridian after the Freedom Foundation posted his name and photo on Facebook.

Health Freedom Idaho, the anti-vaccine nuts who kicked off that confrontation with police, have issued the same call.

This effort should be called what it is. An attempt to constitute an illegal, constitutionally unauthorized parallel government. An attempt at insurrection. Those lawmakers who choose to show up at this session violate their sacred oaths and demonstrate contempt for the republican form of government. They’ll lose, that’s certain, but every Idahoan should be terribly afraid that there are any in positions of elected officials who are so ready to trample on the Constitution and system of government they swore to preserve.

Disclaimer: While it is our opinion that these actions proposed by the far-right to potentially may violate state rules on how the legislature can convene a special session, we will leave it up to the courts to decide if these actions violate the law. We sincerely hope no legislator is foolish enough to attempt an impeachment attempt that would circumvent the will of the voters who legally elected a state constitutional officer. Breaking one’s oath of office is a serious offense to which voters should pay close attention and remember in the next election.