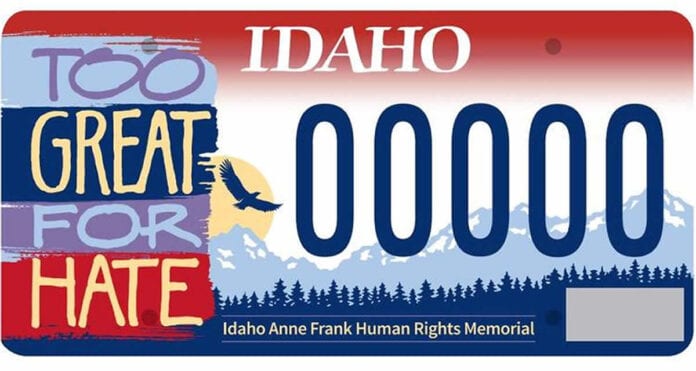 Idaho has a complicated history with hate. In the 1990’s North Idaho was the headquarters for Aryan Nations head Richard Butler. His devoted followers remained in Idaho long after his compound was bulldozed. Shortly before his death, Butler emphasized that while they may have taken him down, the seeds of hate he planted would live long after him. Sadly, he was right.

First, a little Idaho history refresher. In the early 2000s, a North Idaho preacher started a church called the “Ark” not long after the Aryan Nations compound was destroyed. Butler’s followers needed a new place to worship and the Ark rose as the new face of hate in Idaho, carefully rebranded as “Christian Identity”. Rooted in the supremacist doctrine of “Dominionism”, this church attracted Barry and Anne Byrd to join their congregation. After a spat and a failed attempted to take over, the Byrds left the Ark and started their own group called the Marble Christian Community. They found a clever way to blend their hate by wrapping it in politics and hosting a “God and Country” Fourth of July event each year. They handpicked Washington State Representative Matt Shea to lead their political movement and attempted to push an agenda of segregation through the formation of something they called “The State of Liberty”, a place where Shea wrote, “If they do not yield – kill all the males.” His manifesto titled, the “Biblical Basis for War” is rooted in the same Dominionist doctrine that powers the Christian Identity movement.

One of Rep. Matt Shea’s fiercest defenders in Idaho is none other than Idaho Second Amendment Alliance founder and president, Greg Pruett.

Pruett, who we recently learned works with the extremely shady political operatives and grifters out of Iowa, the Dorr Brothers, also has deep ties to far-right and white nationalist supporters. His close friend Brent Regan chaired a Kootenai County Republican Central Committee (KCRCC) meeting where they brought in white nationalist YouTuber, Brittany Pettingbone to ask for their help in getting Idaho congressman Russ Fulcher to speak up on behalf of her fiance to get a waiver on his visa so she could get married. We wrote about this last year in our article, The Martyrs of North Idaho:

“Brittany Pettibone attended a KCRCC meeting to seek assistance in getting a visa for her fiancée to travel to the United States so they could get married in Idaho. Seems harmless enough right? The trouble is that Pettibone and her fiancee, Martin Sellner, are promoters of an ideology called “The Great Replacement”, an idea that the left is pushing mass migration of people from the Middle East and other non-white countries into traditionally white nations to destabilize existing cultures.

The same ideological rhetoric was chanted in the infamous Charlottesville rally and a driving force behind a serious backlash against migrants moving into European countries and immigration on the southern border of the United States. Sellner, the co-founder of the Austrian chapter of Generation Identity and donor to the suspected Christchurch shooter, has been refused entry into the country by the United States.”

Should we be surprised when Greg Pruett backed legislative candidate George Judd once again rallies their base under the specter of the murder of a protester in Charlottesville by an alt-right white nationalist?

This is beyond disgusting, it is truly terrifying.

Now Pruett may try to play the “I don’t really know him” game as he tried with Sara Brady after he was caught pushing protests that led to Ammon Bundy and other followers of his gun rights group to show up at the arresting officer’s home. No one, especially elected officials should ever “joke” about killing people.

Pruett wrote an article about Judd on his astroturfing website Keep Idaho Free and promoted his campaign on his Idaho Second Amendment Alliance Facebook page.

Greg Pruett, George Judd, and the rest of the Idaho Freedom Foundation group have a long history with hate.

Last year this group waged open war on diversity and tried to defund Boise State University because they were offended by independent groups hosting multicultural graduation celebrations that were paid for by corporate sponsors like Coca-Cola.

Rep. Chad Christensen, a legislator Pruett stakes his reputation on getting elected, was mortally offended by gender-neutral / family restrooms that had publicly funded sanitary napkin dispensers. Christensen also racially profiled supposed MS-13 gang members while trying to pull a protest stunt at the East Idaho State Fair. He has been very vocal in his distaste towards the LGBTQ community and expresses outrage against anyone who does not think as he does.

Rep. Bryan Zollinger who is employed at Idaho Freedom Foundation board member Bryan Smith’s medical debt collection law firm used the Charlottesville rally to “double down” and fundraise for his campaign. Smith is one of Pruett’s top financial backers. The Spokesman-Review reported that “Idaho Falls Rep. Bryan Zollinger said Monday that he’s doubling down on the claim that it is “completely plausible” that Democratic officials staged the tragic events in Charlottesville, Virginia, to smear President Donald Trump. And he said donors are pledging to give him money in response to widespread criticism of the post.”

Should we be surprised that Rep. Scott was named over a dozen times in the report compiled by a former FBI agent that concluded that Shea had engaged in domestic terror activities? The same Matt Shea who called for the killing of anyone who did not submit to their Christian Identity doctrine?

Pruett, Scott, Judd, Zollinger, Christensen, and the rest of the Idaho Freedom Foundation-backed far-right are in open warfare with Idaho’s Republican Governor Brad Little over Coronavirus lockdowns in an effort to push their favorite, Lt. Governor Janice McGeachin, to get elected Governor next time around. More proof that the far-right will exploit just about anything to take power in this state.

This is the same Janice McGeachin who thanked one of her supporters for saying, “I’m proud to be white again…” and who attempted to swear in a militia during her brief stint as acting Governor of Idaho.

Idaho’s far-right was given a chance to reject hate when a bill came before the Idaho House of Representatives to approve a license plate that said: “Too Great for Hate”. This bill was sponsored by the only African American State Senator, Cherri Buckner-Webb. Buckner-Webb has a long history of fighting hate in Idaho. Her mother was a civil rights activist and as a child, she remembered seeing a burning cross in their front yard. The Idaho State Senate passed her bill, only to be shot down by far-right legislators in the Idaho House of Representatives.

Idaho’s far-right succeeded in doing what the KKK failed to do to Buckner-Webb’s parents decades earlier; block efforts to stop hate in Idaho.

With everything going on in America right now, using the protests based around the murder of a person of color by a police officer in Minnesota to rally their base to win Republican primary elections is disgusting.

While many of the protests have turned violent and dangerous, no one should ever be calling for the outright killing of people expressing their rage, however unlawful and extreme their actions may be. 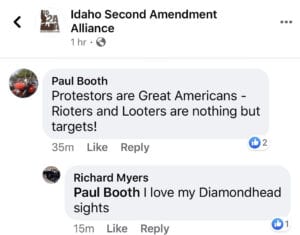 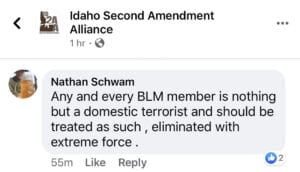 The majority of Republicans in Idaho need to stop being silent and stand up to this small group of loud and hateful people and let them know that we do not stand for the promotion of violence and hate in Idaho.

Our state is too great to let hate represent the good, hard-working people who come from all walks of life in Idaho. Let’s honor the efforts of Cherri Buckner-Webb and her parents’ contribution to this state and stop this hate from spreading.

This article was written by Idaho Conservative Board of Directors members Jennifer Ellis, Kassidy Ellis Telford, Julie and Garth VanOrden, and Stephanie Mickelsen.

Disclaimer: The image George Judd used came from an article about a Boise State truck that struck cows a few years ago and has nothing to do with the hateful reference Judd used.