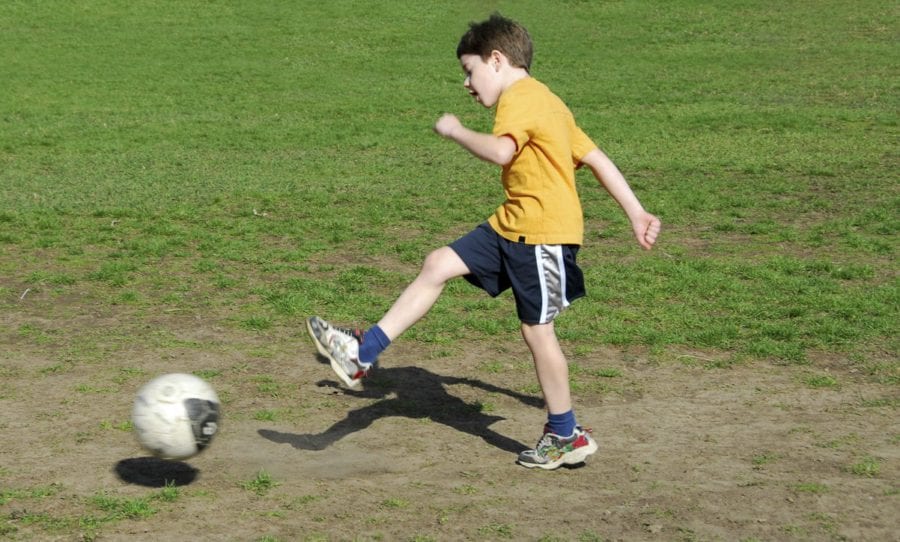 I remember watching my then 4-year-old play soccer. Well, he wasn’t really playing soccer. He was chasing his shadow along the sideline while the rest of the kids weren’t playing soccer either. Aside from the two goalies — which means you get to do pretty much nuthin’ but throw dirt clods and lie down under the net when dad ain’t lookin’ — this spectacle was a roughly circular cloud of dust and children kicking frantically at the poor soccer ball mysteriously trapped inside the pre-K melee.

It was obvious that the only thing they knew about soccer was to kick the ball. Or at the general direction of the ball. Or at the thought of just knowing there is a ball in there, somewhere. And they were all honestly trying their 4-year-old best. Frantically. Simultaneously, but without a strategy, teamwork, or any social awareness. Just a bunch of little kids in a frenzied circle kicking at a ball. Like a slow-moving bubble graphic on a screensaver, this gaggle of kicking children would gradually drift around the soccer field. It’s actually a rather strange ritual to the unattached social observer.

Once in a while, some kid in the center of the chaotic horde would connect at just the right angle and the ball would become dislodged and shoot out from the group. Not accustomed to seeing the soccer ball much, this was a cue for parents to escalate their occasional hollers of support, to all-out screaming for their child to beat the other kids to the emancipated ball and instantly become David Beckham, all the way to the goal. If the kid managed to make it, the law of averages dictates that it was the right goal about half the time. That’s if little Beckham didn’t trip over the goalie occupied with lying down and playing with sticks.

For some reason, that imagery has stuck in my head for years. Of course, it’s hilariously endearing when little tykes, not that far removed from potty training, morph into a kicking herd of dust for an hour after a car ride when dad says words like “passing”, “patience”, “team”, “goal”, and “strategy.” It’s confusing because none of those big words have anything to do with what color of Capri-Sun drink and granola bar they get afterward when the grown-ups blow a whistle and tell them they did fantastic. Endearing indeed.

Sometimes I wonder if maybe a version of that endearing mindless 4-year-old energy endured into adulthood. There are days I swear we’re all still on that soccer field kicking and kicking, oblivious to the larger picture, and especially oblivious to the goal, not working together. Some days we’re kicking at Twitter messages. Other days we’re kicking at paranoid scenarios that only might happen in very unlikely circumstances. We spend our time kicking at the most nefarious caricature of our political foes. We kick at words we find offensive without consideration of the less offensive motivations that led to their utterance. We kick at the gap between the impossible world we want and the imperfect world we have. We kick at the people we think are at fault for the gap. Just lots and lots of dust and kicking, and still without strategy, teamwork, or much social awareness at all.

That’s not to suggest we should live in some sort of non-competitive kumbaya environment. But we could all stand to develop more strategy and teamwork, more passing and patience. More thought toward the end goal, and ultimately mutual respect for all, however, it turns out. These are all complex lessons not fully learnable by the developing brains and hearts of 4-year-olds.

The good news is that most of us are no longer 4-year-olds, but adaptive adults able to rise far above my sociological metaphor of a weekend soccer match of chaotic munchkins.

Associated Press award-winning columnist Neal Larson of Idaho Falls writes at www.neallarson.com. He is also the author of “Living in Spin.” He is a conservative talk show host on KID Newsradio 106.3 and 92.1, and also at www.kidnewsradio.com.   “The Neal Larson Show” can be heard weekday mornings from 8:00 to 10:00. His email address is neal@590kid.com.