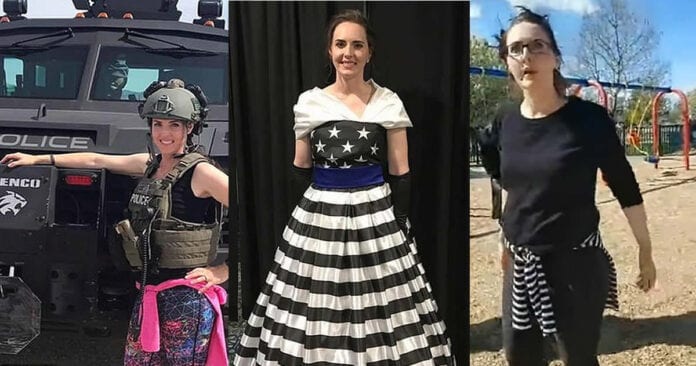 Former Health Freedom Idaho community organizer and anti-vaccine activist Sara Walton Brady would be right at home on the Far Left, which she proved by staging her own arrest this week.

The City of Meridian closed playgrounds to children and taped them off to keep the coronavirus from spreading. Sara Walton Brady ‘s allies tore down the tape as a part of their planned protest. When police arrived to enforce city law, it appears the far-right network already had its anti Law Enforcement plan in place.

After arguing with a Police Officer carrying out his duties, who gave her every chance to walk away from the situation, she demanded to be arrested. When the officer gave in and started putting on the handcuffs and he didn’t respond with force.

Sara Walton Brady called out for her friends  to call in their allies at the Freedom Foundation. Others started calling the Far-Right Political Machine’s enforcement and intimidation arm, The Idaho Real 3%.

Then members of all the groups blocked the roads in front of the Meridian Police Department while shouting at Police Officers who were just doing their jobs.

The Freedom Foundation posted the name and photo of the police officer who Sara Walton Brady goaded into arresting her.

Before long, their allies were at the officer’s doorstep intimidating his family.

Step 1: Orchestrate a crisis.
Step 2: Take it viral.
Step 3: Use the fake crisis to raise money and social media followers.

Do these tactics sound familiar? They should. They’re taken right out of the far left playbook.

Watching Flake decide he wants a FBI investigation, never forget: This is why we do direct action. This is why we “get in people’s faces.” This is why our stories matter. pic.twitter.com/3pbSXcPZG6

When Democrats wanted to keep Brett Kavanaugh off the U.S. Supreme Court, they used the same playbook. Two women cornered Republican Senator Jeff Flake in an elevator and attempted to shame him into voting against Kavanaugh.

They weren’t two random women. They were activists from the far-left Center for Popular Democracy, who staged the event with the hopes it would go viral. They probably wouldn’t see eye to eye with Sara Walton Brady on vaccines but they use the exact same tactics.

Who could need any more proof that Health Freedom Idaho, the Freedom Foundation, the Second Amendment Alliance, and the rest of the Far-Right Political Machine are RINOs? Does being a Republican mean blocking roads when you don’t get your way? Does being Conservative mean attacking Law Enforcement Officers?

These are the tactics of the Far Left and the Far Right is simply their mirror image. It’s time for real Republicans to stand up and show who they are the way Representative Greg Chaney has.