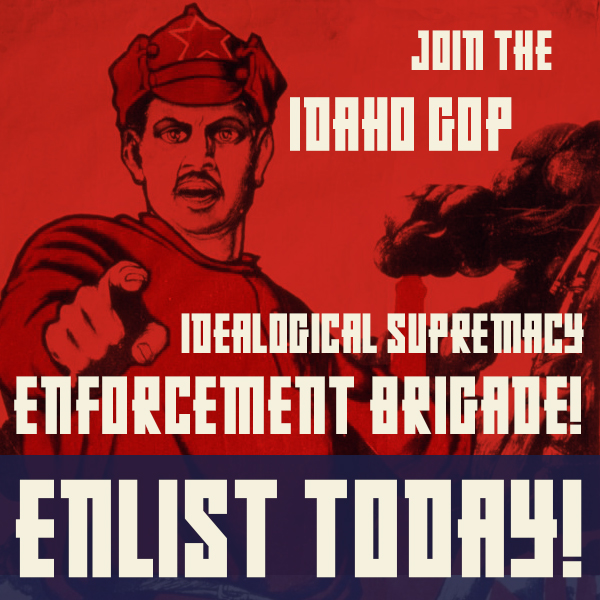 The Idaho GOP summer meetings are in session in Boise this week. Voting delegations are substantially smaller at this meeting as it is an off-year and not a full blown convention. Many important decisions will be made by those with voting authority. The party will elect a new interim Chairman and rules and resolutions will be channeled through the various committees to become part of the mechanism by which the party conducts business.

We are very concerned about the possibility that if certain rules and resolutions make it through that process the enforcement mechanisms will be disastrous to our elected official’s ability to conduct the very serious business of our state.

There is a movement brewing within the party from the far-right that is taking elements of the party platform to codify their ideological vision. By presenting resolutions that will give their enforcers strictly defined measures, they are giving their select loyal PCOs blunt objects to beat into submission anyone who strays outside their lines.

There are proposed resolutions that define the party platform to support future legislation from the liberty caucus, written by members of the minority far-right. By passing their resolutions, they will likely use this to hammer legislators into agreeing to support appalling bills that will continue to make national news and make Idaho look like we are regressing into the dark ages.

Legislators represent their constituents. It is the party’s job to educate the electorate on Republican ideas not take away their legislator’s ability to represent them properly. Moving down the line of creating ideological enforcement squads gives the Democrats one more talking point that we behave like the Gestapo.

We strongly urge the voting delegates at the summer meeting to reject ideological supremacy enforcement. The rules and resolutions are masked in what may appear to be conservative principles, yet their true nefarious objective will tie the hands of Republican legislators from voting the way their constituents want and forcing them to bow down before the far-right masters trying to take over the party.