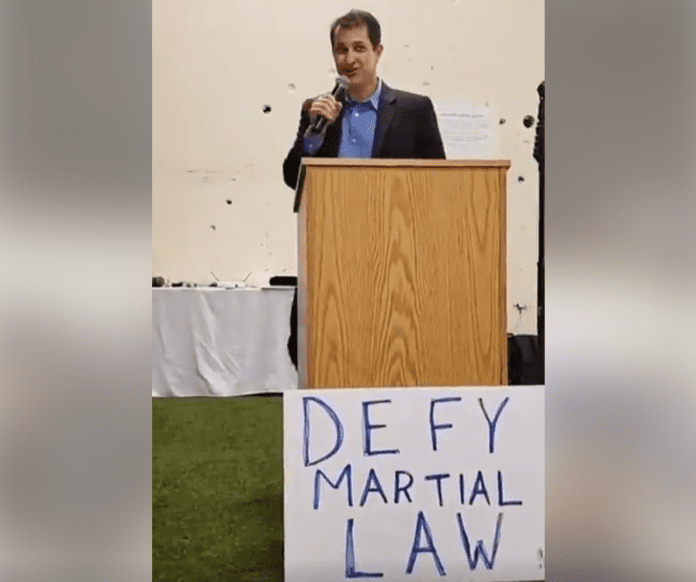 On March 25th, our Republican Governor Brad Little issued a stay home order to stop the coronavirus from spreading and The Freedom Foundation started attacking him right away.

“It is wrong, and we at IFF assert, unconstitutional, for the government to take away people’s right to earn a living, to assemble, and to move about freely. You correctly noted a couple of weeks ago, “history will remember our reaction” to this virus. It is worrisome that what people will remember is how people were forced to surrender their freedom for the notion of security.”

Now the Freedom Foundation is telling its extremist followers that it’s time to resist, or lose their Liberty forever. Its as if they don’t know the coronavirus emergency is real but now we know exactly how real it is.

What might have happened if Governor Brad Little listened to the Freedom Foundation?

Models from the Institute for Health Metrics and Economics give a good estimate of how many people would have been killed if Governor Brad Little had listened to the extremists at the Freedom Foundation instead of his own Public Health Experts. Most likely, about 384 more Idahoans may have died in the next several months and it could have been 965 more.

How can we tell?

The institute’s model, that has been used by President Donald Trump and many others, released one set of predictions for coronavirus in Idaho on March 25th at the same time that Governor Little issued his stay home order. Since he issued it the same day as the predictions were released, the institute couldn’t yet tell what effect it would have on the spread of the coronavirus. So these predictions give us a picture of how things would have been without our Republican Governor’s order.

At that time, the Institute predicted that there would probably be 459 deaths in Idaho, and up to 1,179 deaths. It also projected that there would be more patients needing ICU beds than the total number of ICU beds available in the state between April 19 and May 7, almost 3 weeks where Idahoans in critical condition wouldn’t have a bed to take them. These would be hopeless cases. Doctors could only try to make them comfortable as their lungs failed.

The latest predictions, which take the effect of Governor Little’s order into account, predict about 73 deaths by August, at most 205. It’s a tragedy and no one should minimize it. However, it’s a world of difference from what would have happened if the extremists at the Freedom Foundation had their way.

The Freedom Foundation has teamed up with Idaho’s chief extremist, Ammon Bundy, to defy the governor’s orders and actually risk the physical health and safety of this state. On Easter Sunday, Wayne Hoffman spoke at a gathering convened by Bundy in defiance of Governor Little’s order.

“Fear is the work of the Devil. That fear keeps you cowering in your house, afraid to talk to your neighbors, afraid to shake hands, afraid to offer a warm embrace to somebody,” Wayne Hoffman said after hugging a man.

When a virus has killed 25,000 Americans in a few weeks, fear is not the work of the Devil. Fear is the rational thing to feel and caution is the rational response. Hugging a stranger in a gathering of extremists who are trying as hard as they can to get infected, as Ammon Bundy said he is, is childish insanity.

The Constitution guarantees our God-Given rights. The most important one is the Right to Life and the Freedom Foundation may have taken it away from hundreds of Idahoans if they got their way. When the coronavirus crisis has passed, we know our Governor will return things to normal but we need a steady, adult hand at the reins of the state, not the irresponsible extremism of a child.

UPDATE: Idaho Freedom Foundation President Wayne Hoffman has recklessly called for the open resistance to the Governor’s revised stay home order and has told businesses to open their doors. https://www.facebook.com/idahofreedom/videos/232477364637070/

This article is part of our series covering the political response to the COVID-19 pandemic in Idaho. We stand with and support businesses and individuals who are struggling with the stay-home order. These are difficult times and we hope that the state can find a way to reopen as soon as it is safely possible.

Views expressed in this editorial on IdahoConservatives.com do not reflect the views of any other individuals, groups, companies, or organizations.