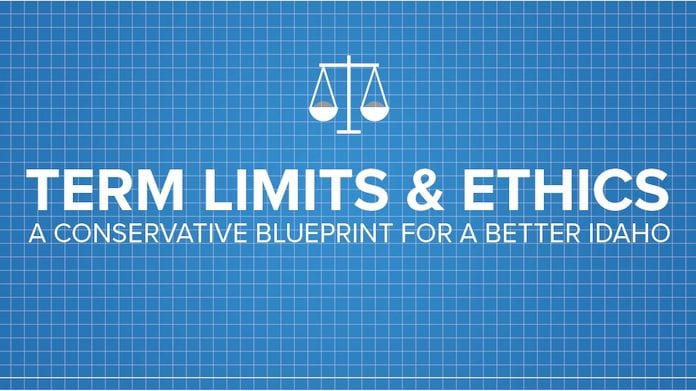 States across the nation have enacted term limits and ethics reform laws to help protect their taxpayers.

When professional politicians spend too much time in office, they simply lose touch with the realities of what Idaho families and businesses face. As a result, they put the needs of special interests ahead of the

needs of the Idaho taxpayers they were elected to serve. And that’s just not right.

Idahoans want a fresh approach and new ideas for tackling our state’s biggest challenges — and it’s past time for real state government reform that includes both term limits and ethics reforms. Idaho also needs increased transparency in state government, lobbying, and campaigns along with simple taxpayer protections to better secure Idaho’s future — and as a political outsider I will do just that.

Term Limits. The first item in my 10-point Term Limits & Ethics Reform Plan is limiting executive statewide elected officials to a maximum two, four-year terms. This step is critical to ensuring we have responsive, citizen-based executive leadership — and to avoid allowing the status quo to run the statehouse for years on end.

Executive leadership in our state should serve for a specific amount of time, accomplish their goals for the people of Idaho and return to the real world as quickly as possible as envisioned by our founders. My goal as your next governor will be to bring real-world experience and much needed new ideas and a fresh approach to government. Term limits of executive leadership in our state will help better ensure that these objectives are met.

Economic Interest Disclosure. Idaho is one of only two states that has no disclosure requirements for elected officials. My plan would simply require elected officials to disclose their sources of personal income, which is considered a very basic transparency measure to help avoid impropriety. Disclosing this information will fill a gaping hole that has persisted in Idaho’s ethics laws for far too long.

of taxpayer dollars. We must require full disclosure of state-funded travel when elected officials travel outside the state, so taxpayers have confidence those officials are indeed traveling for state business. We must also prevent pension spiking — a practice where elected officials pad their retirement by taking high-paying, taxpayer-funded jobs after leaving elected office. This reform puts the interests of Idaho taxpayers ahead of those of Boise politicians and is the fiscally and ethically responsible thing to do.

Another common sense taxpayer protection needed in Idaho: ensuring government officials convicted of a felony don’t receive a taxpayer-funded pension. This is a simple reform: If you do not live up to the standards expected of public officials, you do not get a pension. Period.

Lobbying Reform. The state of Idaho is also in need of lobbying reform. My plan includes the creation of an online searchable lobbyist gift database, which would increase transparency of the relationships between lobbyists and elected officials. Additionally, my plan would require lobbyist campaign disclosure requirements, a common-sense step to make sure special interests are not unduly influencing elections.

Public officials should not be able to use their elected or appointed positions to leverage big payouts in the private sector — a practice known as the “revolving door.” My reform plan would institute a two-year waiting period for state legislators and state executives in Boise from becoming lobbyists because I want taxpayers to have the security of knowing that those that they elected or appointed to represent them are not using this trust to carve out a big payday for themselves.

Campaign Finance Reform. In terms of campaigns, it’s time for Idaho to step up and ban all campaign contributions during the legislative session — and ban politicians from paying family members from campaign accounts. These practices should be stopped and these reforms are the right thing to do.

As your next Governor, my Term Limits & Ethics Reform Plan will help us to protect our hard-earned taxpayer dollars and ensure they are spent as efficiently and effectively as possible. I will work around the clock to ensure Idaho finally has these long-awaited term limits and ethics reforms. Fundamentally shining a light into Boise’s behind-the-scenes processes is a positive next step toward building an even better Idaho.

For years Idaho has been run without concrete plans for the future — and it’s time for leadership and vision that brings a fresh approach and new ideas. My Blueprint to Build an Even Better Idaho is based on hard work and dedication to conservative principles — and the idea that it’s time for less talk and more action in Boise. As your next Governor, I promise that is exactly what I will do.

Ahlquist’s Conservative Blueprint to Build an Even Better Idaho and Term Limits and Ethics Plan can be found online at https://tommyforidaho.com/ethics/